Sign Up to our social questions and Answers Engine to ask questions, answer people’s questions, and connect with other people.

Lost your password? Please enter your email address. You will receive a link and will create a new password via email.

Sorry, you do not have a permission to ask a question, You must login to ask question.

Please briefly explain why you feel this question should be reported.

Please briefly explain why you feel this answer should be reported.

The long-awaited verdict brings to close a six-month trial over the assassination of Thomas Sankara on October 15, 1987. 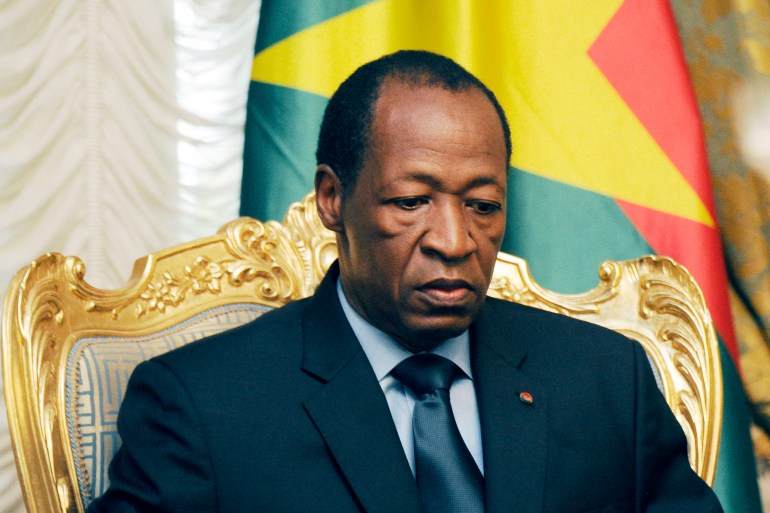 A military court in Burkina Faso on April 6, 2022 handed down a life term to former president Blaise Compaore over the 1987 assassination of revolutionary leader Thomas Sankara, following a six-month trial [File: Sia Kambou/AFP]

A Burkinabe court has sentenced former President Blaise Compaoré to life imprisonment for the murder of his predecessor, the revered Thomas Sankara.

The long-awaited verdict on Wednesday brought to close a six-month trial about the murder of Sankara, who was assassinated during a coup led by his friend and comrade-in-arms Compaoré on October 15, 1987.

Military prosecutors in Burkina Faso’s capital, Ouagadougou, had requested a 30-year sentence for Compaoré, who was being tried alongside 13 others.

Two other main suspects were also handed life imprisonment sentences. They are Gilbert Diendéré, one of the leaders of the 1987 putsch and leader of the 2015 coup, as well as Hyacinthe Kafando, leader of Compaoré’s guards at the time.

Compaoré, who was unseated in a 2014 uprising, fled to neighbouring Cote d’Ivoire where he was given citizenship. He was tried in absentia, like Kafando unlike Diendéré who is in custody.

A pan-Africanist leader who had taken power in 1983, Sankara was killed aged 37 along with 12 other government officials. Compaoré became his successor, ruling until his 2014 ouster.